After a convincing mid-week thrashing of Thornaby in the FA Cup, Ossett United returned to league action which saw them host Ramsbottom at Ingfield Stadium.

Ramsbottom came into the game in 2nd place, after a strong start to the season and they were displaying attacking threat from the off, which you would expect from a team near the summit of the table as they accumulated 2 quick successive corners early-on.

However, as the half continued it was the hosts piling on the pressure, with Andy Monkhouse sending the ball just over the bar from an Elliott Harrison corner.

Continued pressure and chances for Ossett eventually led toa wonderful move, started from a Stockdill, who picked up the ball in the middle of the pitch with a delightful dink over the Ramsbottom midfielder. The ball eventually found Andy Ijiwole down the Ossett righthand side and the on-loan Huddersfield man stood the ball up brilliantly for Nick Guest who headed home to put Ossett a goal in front 13 minutes into the game. 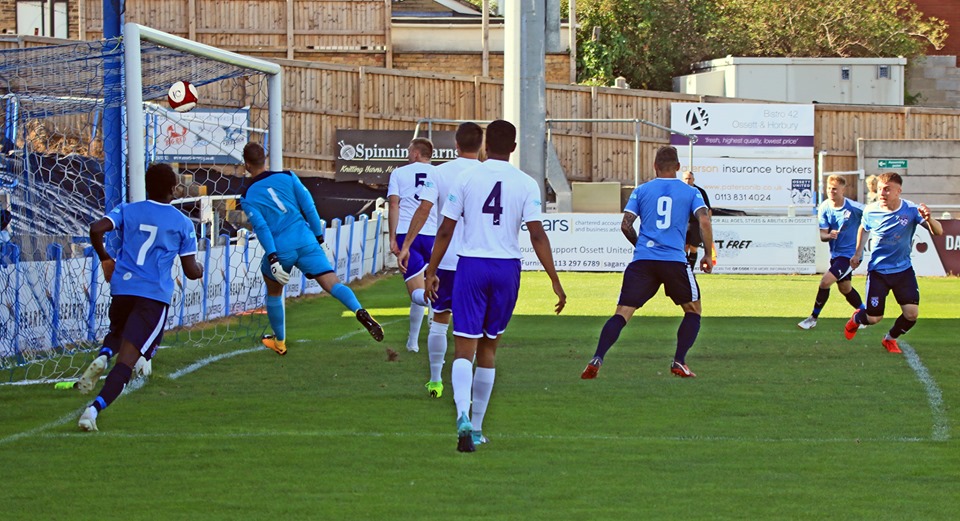 You could be forgiven for thinking the two sides’ positions in the league were reversed, as Ossett United were building more pressure on the Ramsbottom defence as Rams keeper Tom Stewart slammed the ball and his foot against the defender tracking back, injuring the unlucky teammate and giving away a corner.

However, the visitors began to show grit, and from a corner Ramsbottom were level. A packed penalty area meant Ossett keeper Brett Souter was unable to get a clean set of gloves on a whipped in corner, which eventually fell to Teddy Perkins, and the defender finished like a striker into the far corner bring the game level.

It was a much even start to the second half, with both Ossett and Ramsbottom going close, with efforts from Gregory and Chukwu going close for their respective sides.

As the half-continued Ossett’s chances began to accumulate. Former FC United of Manchester striker Tom Greaves, fresh off his 6 goals in the last two games, attempted to add to that rich vein of form with a strike from the edge of area after a beautifully brought down ball from Nick Guest, set the 38-year-old forward up.

Ramsbottom seemed to build a brick wall and sit behind it for the final knockings of the game, and their stout defending earned them a solid point in a tightly fought affair.

Ossett will have felt this was 2 points dropped rather than a point gained, as Andy Welsh’s men make it 4 games unbeaten in all competitions.

Man of the match: Andy Ijiwole